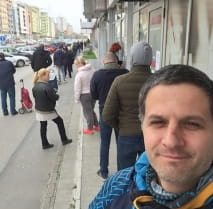 In this post I’ll write about the banking in Serbia, with an accent on electronic banking (“e-banking”).

A great deal of Internet and e-commerce development era, from year 1990 to 2000, Serbia had spent waging wars and going from one crisis to another. Which resulted in an exodus of experts, including those from IT area of expertise, and with a bit outdated e-commerce legislation.

To put it poetically: as 21st century approached, most other countries were changing neon lights for LED, while we were quickly switching from candle light.

Fortunately, we are resourceful and learn fast, so many people, especially the young ones, helped propel the IT industry, so I would say that we have caught up – with a few caveats, but more on that later.

Note: if you Google “experience with this-and-this bank” in Serbia, you will read many horror stories. Similar goes for reading customer reviews on Google business pages. The situation is bad generally. In this website section, I write about my experience with the banks who’s services I have used: Reviews -> E-banking.

2. Problems with electronic banking in Serbia

Or, as the “life-coach” gurus like to say: “challenges”. Note that I’m writing this from my own experience. I have a lot of experience with solving computer-related problems and providing technical support, but I’m still only one man, and have no official stats at hand, so take all this with a grain of salt.

2.1. (Technical) literacy of the average client

I don’t know what the situation in other countries is like, but here most people don’t know how to use computers very well. Younger people do use smartphones a lot (mostly for social networks), but I haven’t seen anyone configuring their phone to use a VPN, for example.

Why do I mention this? Because the most important thing when providing any kind of service, including banking, is for the clients to be happy (the importance of keeping the customers happy – explained using bicycle mechanics as an example).

When I listen to some IT colleagues complaining about the level of Serbian e-banking security (“look, they don’t offer 2FA protection!”), I just remember that an average client has problems with typing in their PIN code on an ATM. Here I explained in more detail how every level of security introduces more inconvenience – as well as why no system can be 100% secure. For those who may be laughing now: do you change all the passwords each month? Do you change at least all the “important” passwords every month? And no – 2FA is not impenetrable protection, it’s just (a lot) more difficult to penetrate.

I’m not a lawyer, so take this with even more salt than the previous chapter.

In Serbia, it is (still) illegal to make payments using PayPal, between residents. While laws and taxes for paying and receiving money, or goods from abroad seem (to me at least) a lot more complicated than it is for the EU residents (within the EU, not in Serbia, of course).

On top of that, people are poor. Average Serb works for about 7 hours, to earn as much as an average German earns in an hour.

These two things, combined (probably also because of the mentality), result in a relatively high percentage of frauds (or fraud attempts). And they definitely don’t make things easier for the bankers.

3. Impression of Serbian banks – in general

As far as I know and could notice, register/cashier workers in Serbian banks are overloaded with work and relatively poorly paid. It used to be a good job, but not any more – at least in the last 5 years (if not longer).

Because of the low standard of living that most customers struggle with, banks need to cut prices, hence cut costs – reducing the number of branches, and the number of staff at counters. So you can expect to wait for about an hour for most things you need to do at a bank.

The fact that many people don’t use e-banking for things that can be sorted that way (paying bills for example) also contributes to longer queues. I wrote about that in chapter 2.1.

After a long introduction, which I think is important in order to understand the topic and context, we come to the main theme of this post: e-banking in Serbia. What’s it like?

I don’t know what it’s like in other countries to compare, but from what I have seen here: it’s not brilliant. In the previous chapters I explained why I think that is the case, but it still sucks in my opinion. What is wrong exactly?

Most banks don’t offer multifactor (2FA) authentication for logging in their online services.

“Fortunately”, the greatest allowed password length is often well below 20 characters, and doesn’t allow special characters (only letters and numbers) – so passwords are relatively easy to crack.

Cherry on the top of the cake are the banks where password change (or reset) procedure is unintuitive, complicated, and/or doesn’t work properly. I may not be the jewel of intelligence and resourcefulness, but with 30 years of working with computers (20 years of making a living out of it), if it’s problematic for me, what should my mother do? I mean, if something were to happen to me, since it is well known that IT people give free technical support to relatives, neighbours, acquaintances, plumbers, local shop clerks, and people we meet on vacation – because “that’s just 5 minute work for us, we know that stuff”. 🙂

I don’t know if strict security criteria (not likely based on the previous chapters) cause the UI design to be neglected, or it’s just cutting costs (and corners), but at best you get poor desktop design (with poorly done “mobile first” web design), or poor mobile phone design (or application), or both those device types get poorly designed user interface.

It can be used, but it’s far from what I’d call very good.

This is the part where the banks wear those robber masks! 🙂

Most banks calculate payments in foreign currencies in euros. And I stop here – will explain it using a concrete example:

But, if I have dollars on my account, it’s even more fun. The calculated price in euros gets exchanged to RSD, then to dollars. About like this:

If you have euros on your account, and the goods are also charged in euros, then you can get away with no conversion fees (though not in every bank).

PayPal is a good choice for paying and receiving payments in some countries. But not in Serbia – at least for now. I explained exchange rate “juggling” in the previous chapter. PayPal does something very similar for us unfortunate enough to (have been born and) living in Serbia.

It exchanges any currency into RSD, using a very unfavorable exchange rate, then exchanges it to euros. If your account, or the fee (or money received) is in some other currency (dollars for example), then several exchanges are calculated, so you end up with losses of about 10%.

Amazon offers direct money transfer to a bank account for every neighbouring country (Croatia, Hungary, Bulgaria, Romania…), except Serbia! And it’s against their rules for me to open an account in a neighbouring country for this purpose. For Serbia – they send a company check. What does that mean?

It means I get 15$ deducted from each payment – for a start. And then starts the adventure of cashing a foreign currency company check in Serbia.